PowerShell developer with background in multiple scripting languages, identity management, and the Microsoft technology stack. PowerShell to the people! 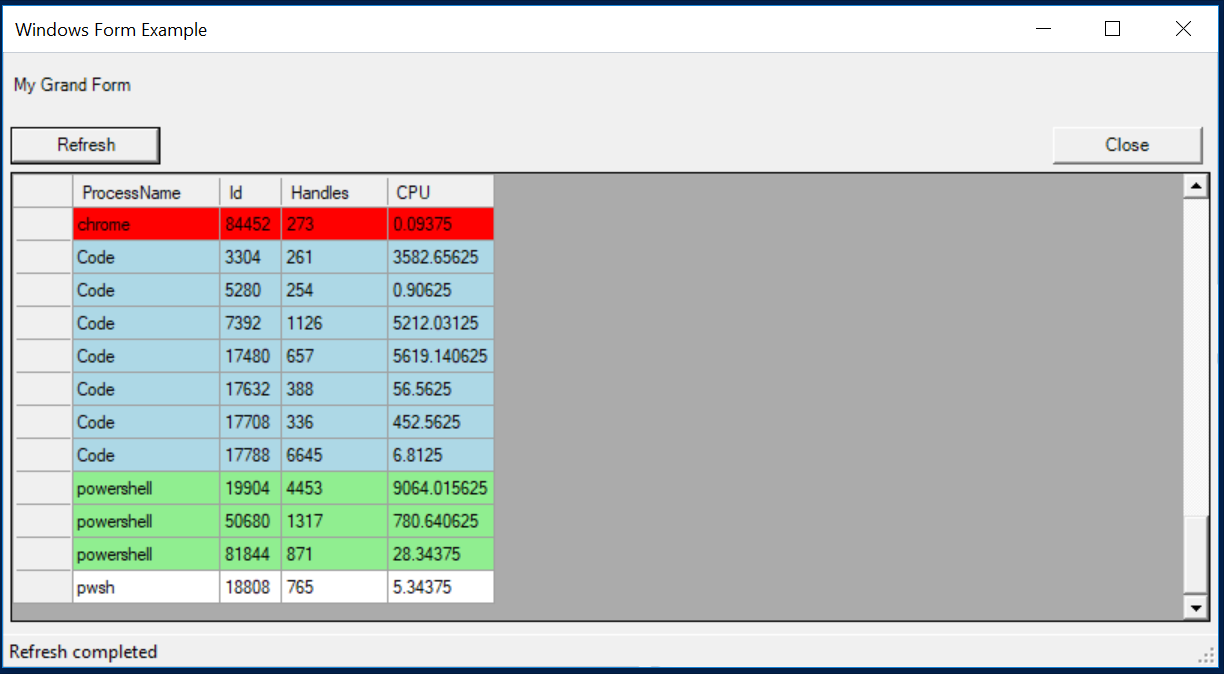 It’s been too long since I’ve posted any content and I wanted to get something out to let you know that I’m still here.

Recently, I was tasked to provide a GUI for a PowerShell script. Okay, I think I tasked myself, but it was an interesting foray into the .Net [System.Windows.Forms] class.

As one does to find script inspiration - some might call this a starting point - I took to my favorite search engine and found numerous scripts built with SAPIEN Technologies PowerShell Studio as well as manually coded scripts on GitHub.

Since a requirement for my task was that I could not use any external application, I was forced to use the manually coded option.

One of the common threads I noticed in the handful of scripts I found was that they really didn’t offer options for parameters. I’ve been a big proponent for creating tools, aka functions, since I first began writing PowerShell code. So, I set out gathering some tools that I thought I would need. The functions I created are by no means complete, nor is the list comprehensive.

Basically, my GUI script needed to be able to the following:

The first thing I needed to do was instantiate a new form object. I wrote New-WindowsForm to handle this. At minimum, I needed to provide the title for the form (which is displayed in the title bar of the form) and the height and width (in pixels). I decided to also add a switch (-NoIcon) that would hide the default icon in the title bar. By default, hard-coded that is, the form will autosize and provide scrollbars.

I then wrote Set-WindowsForm that allows me to add an array of labels, an array of buttons, a data grid view, a status strip, and a script block for the on load event.

The button’s action could be a very complex scriptblock that can load a file to use, set the filename for a log, update the data, and update the status bar.

Then in the Update-DataGridView, I have this code:

Actually, this function is the only one that provides Verbose output at the moment. If I find myself using this ad hoc module often, I’ll spiffy it up with plenty Write-Verbose and Write-Warning statements.

Display the current status in the status bar of the form

In a similar fashion as the form, I created New-StatusStrip and a Set-StatusStrip functions. The first creates a, more-or-less, empty object. The latter function does all of the heavy lifting. It will display the operation, progress, and the progress values.

The Module and Example Script

Now that we have the tools you need to create a quick GUI, let’s create the script that will use them. This simple script will display the form, load specific processes highlighting them based on what we want, and provide a way to refresh the data.

Here is the module and example script.

Here is a demonstration on how this works.

Something else that most forms provide is a way to open a file and to save a file. I have included Get-OpenFileDialog and Set-SaveFileDialog to do just that. These are currently very basic and could use some long-term care (more parameters).

If I use this ad hoc module more, I would need to convert it to fully formed module, via plaster template. I know many improvements can be made on accepting more properties for the various components. Again, this was a quick proof-of-concept.

And that’s how I came to write an ad hoc (not fully baked, developed, bare-boned, or whatever you want to call it) module for displaying a GUI using the [System.Windows.Forms] class.

I hope you’ve found this interesting or informative. If you have any comments or questions, please post them below.

Your email address will not be published. Required fields are marked *